“Early settlers often measured the boundaries of their homestead by tying a rag around their buggy wheel. By measuring the wheel, it was easy to figure out the number of revolutions it should make in one half mile or a mile. All one had to do, then, was concentrate on counting.”

– Memories of Ogema and District Pioneers, “Tales of Old Timers,” 43.

In medieval Europe there was a tradition of beating the bounds on Ascension Day or sometime during Rogationtide (the three days leading up to Ascension Day). Rogationtide, derived from the Latin rogare, to ask, was an official Church sanctioned observance on the calendar. It was a time to pray for God’s blessing on the crops and the prevention of natural disasters like plague and drought. Processions were held throughout the parish, and beating the bounds was part of this.

Though it was a religious event in the Middle Ages, the practice of beating the bounds could be far older. Some scholars speculate it was derived from the Roman festival Terminalia, with others claiming pre-Roman “Celtic” origins for the practice. Whatever its origins, it is clearly folkloric in nature. Boundaries have been important for as long as humans have claimed certain spaces and places as their own. In the centuries and millennia before ordnance maps and road signs, boundaries existed in folk memory only. One had to remember that this side of the river belonged to us, but that side of the river did not. This grove is ours, that hill is theirs. During the beating of the bounds, young men sometimes had their heads bashed against rocks or trees, or had to wade across streams so they would have a physical memory of the boundary. People marked the boundary spots by flailing them with willow wands or switches of hazelwood. Some places in England still carry on this tradition, though with less bashing in of heads.

As far as I know, no similar tradition exists in Saskatchewan. However, yesterday was Ascension Day, and if there is a better way to spend a Thursday evening than perambulating a quarter section, I don’t know it. And so I beat the bounds of my family’s original homestead quarter. There was no beating or bashing of anything, just the occasional stamping of feet from frustration at  the hordes of mosquitoes feasting on my flesh. But it was a good exercise, in more ways than one. Each quarter section being a 1/2 mile long, I walked two miles over freshly seeded ground. And it was an exercise in observation. Why did my great great grandfather choose this particular piece of land?

He was one of the first in the Gap country to claim a homestead, so he had the pick of the land. It had not been surveyed yet. According to family history, Grandpa Tom and his brother Jim “travelled over a lot of land and decided on the land we now have.” It is not written why they chose it. As I ambled about last evening, I tried to figure out why they might have done so. It’s relatively flat. The soil is heavy, lots of clay. Perhaps the native prairie grass grew more lushly there. There is a draw, a shallow drainage passage that funnels water from the spring runoff or heavy rains. Water is scarce in these parts, so perhaps this draw drew them in? However, there is a creek just a mile or so to the south. Why not homestead there, where the water was more abundant? When I got home, I asked my dad why they had chosen this particular land. He said something about the grass growing thicker there, and about the “pothole slough” which provided a water source. I noticed this tiny body of water, more a puddle than anything, but did not think it was significant enough to photograph. Apparently I would not have been a very good land prospector.

The draw winds its serpentine course. Though it doesn’t look like much, it’s a verdant paradise for insects, birds, rodents and reptiles, just as important a river valley as the Tigris or the Euphrates. So life-giving is this little passage for water, it even permitted the growth of a solitary tree.

The lush vegetation produced by one modest draw: a profusion of cattails and a lone Manitoba Maple.

For whatever reasons they chose it, this quarter section (160 acres) became their new home. To prove it up, they had to pay a $10 registry fee and then they had three years to break ten acres of land a year, build a house and live on the homestead for six months each year. The first house was a “soddie.” After the three years, if the homestead had been successfully “proven up,” one could file for a pre-emption, the adjoining quarter section, at the bargain basement rate of $4 an acre. This was done, and by 1909 they had a half-section of land, 360 acres. In those days, that was something.

During my walk, I came across some fragments of the past: two were probably homestead relics, the other is far older. There was a horseshoe, rusted and bent out of all proportion. It’s a big one, so perhaps it came from a draft horse, thrown while pulling a plough or a hay rake. But my great great-grandfather Thomas had a blacksmith shop on the homestead when they first started out and my great great – grandfather Ernest Freeman who homesteaded a mile south was a blacksmith also; perhaps it was discarded from one of those smithies. I also found, not far from the shoe, some kind of part from farm machinery. There is a bit of writing on it; all that I could make out was “lbs” and “Canada.” Not much help. It’s very heavy, very rusty, but still in okay shape. I have no idea what it could be. When I asked my dad, he suggested some kind of gear from a threshing machine, the giants that were used before combines. In that case, it could be 90-100 years old. The last thing I found was a natural feature, here long before iron came to the prairies. It’s a mottled stone, not exactly an omar, but interesting nonetheless. It was probably caused by something glacial. just like the Gap country itself.

Remnants of the past.

As for the boundary of the land itself, it was pretty clear, as are most land boundaries in Saskatchewan. The land was very precisely parcelled up by surveyors. I knew that after a half mile, this quarter section would end, and the next begin. It was also obvious by the change in the field; their field was stubble, ours was not. Also, at the end, there are little triangles of land where the farm machinery has had to cut corners to make the turn. This is a good Saskatchewan indicator of a land boundary, at least boundaries of farmland. 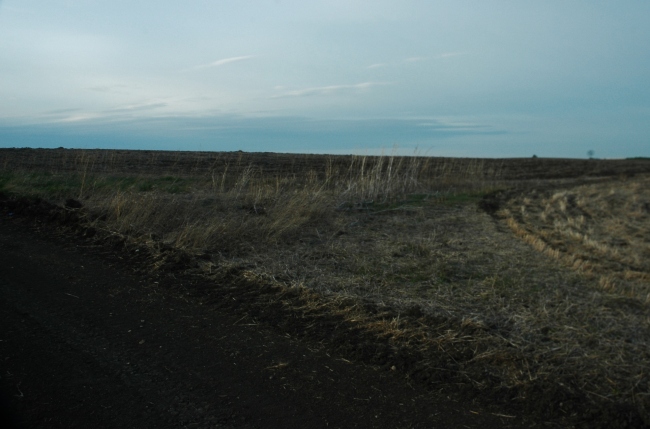 After beating the bounds of my family’s original homestead land, I have a little better understanding of why they chose it, though their reasons are lost to time. Whatever compelled or impelled my great great-grandfather to stake a claim on that particular piece of land, we still call it our own, and it’s one of the reasons why I’m here now.